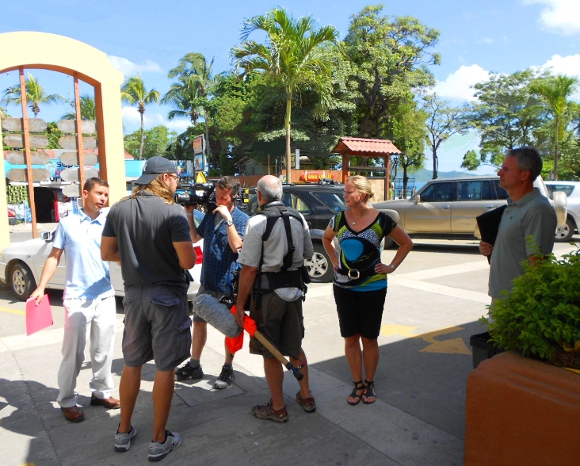 "Who would have thought you'd be on TV?" said Re/Max Ocean Surf Realty agent Chris Spears' mother after watching the House Hunters International episode featuring Chris and his clients Lynne and David Jenkins.

In June of 2012, House Hunters International contacted Spears and asked him if he would like to participate. His response was typical Spears' style, "Absolutely! Where do I sign? When do we start? What do I have to do?" Spears nickname in high school was actually Dr. Q because he's always full of questions and eager to learn, traits that make him an interesting person and a great real estate agent.

House Hunters International asked Spears to submit a video interview for approval, and a few days later HGTV contacted him to ask if he had any clients that would like to film an episode. Spears quickly contacted several of his clients and each submitted a video interview. The producers were particularly impressed with David and Lynn Jenkins of Ontario, Canada, and the three soon learned they'd received the green light.  We're a go! Filming to start shortly! 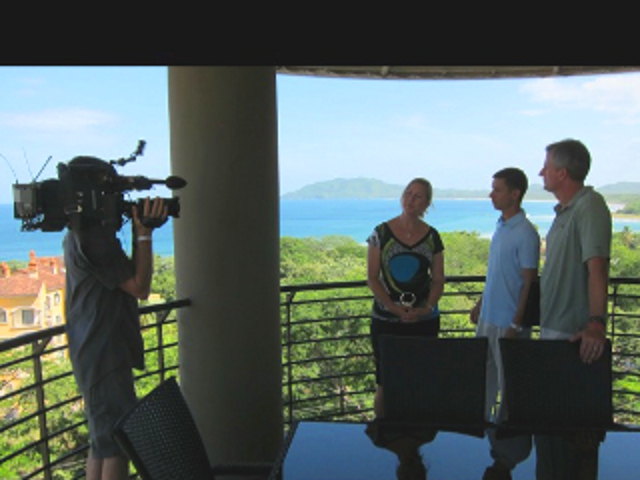 Filming commenced two months later, and was a more time consuming process than Spears, Lynne or David had anticipated. For each scene, the producer filmed Spears asking David and Lynne questions about their preferences, impressions and opinions. Next the producer would change the camera angle to David and have Spears repeat the questions while filming David's responses.  Then the producer would change the camera angle yet again to record Lynne's answers.  And on it went for each scene - at the office, in each of the properties, around Tamarindo. In total, the filming lasted for nearly 14 hours.

House Hunters International told us here at Re/Max Ocean Surf Tamarindo that the Tamarindo show featuring Spears would air during the fall 2013 lineup, so the anticipation began.  Starting in September, we all watched the HGTV Househunters website to see if this would be the week. Finally, we received the announcement that Spears show would air on November 19, 2013.  Spears and his wife Elena, who works in the vacation rental department of Re/Max Ocean Surf Realty, quickly bought tickets to travel to the United States as the episode would only air in American and Canadian markets.

Spears and Elena arrived in California two days before the premier to visit the sights, and of course, take in one of Spears favorites: The Price is Right.

Then came the day for the premier.  Spears friends in LA arranged for party in front of a huge TV to celebrate his first TV appearance.

Spears and Elena arrived at the house where their host Jim immediately announced, "We'll eat first and then watch the show afterwards."  Understandably, Spears wasn't thrilled with this plan, but he decided to be polite and just go with flow.

Jim then had the bright idea of using the DVR to record and pause the show so that they could skip over the commercials.  The guests continued mingling and eating, and just a few minutes prior to the end of the show, everyone made their way to the living room for the premier.

Here's where it gets funny.  Jim pushed pause and there it was, Chris Spears on TV!  The episode had been running for about 2 minutes when Jim started playing with the remote control for the DVR.  He accidentally changed the channel and lost the entire show!

Apparently Jim is not a very technical guy, so he started trying to retrieve the show. It turns out everyone in the room except Jim knew this was not possible.  Jim's mortified wife moaned, "Why couldn't you just continue recording the episode instead of pausing it?"

"Obviously that seems like the best thing to have done now, but I thought it would be fine just pausing it," replied Jim.

"Well why in the world were you fidgeting with the remote in the first place!?" she yelled out.

"I don't know but I am sure I can get it back!" the embarrassed Jim retorted.

Well, to make a long story/marital dispute short, Spears and the rest of the party-goers finally got to see his show later that night when HGTV re-ran the episode. Immediately following the airing, all of Spears' friends started commenting on his FaceBook page about his TV debut.  You've finally hit the big time Spears!

House Hunters International was so pleased with Spears that they recently asked him to film another episode.

We will keep you posted about his upcoming episode.  Meanwhile, take a look at our website, find the property of your dreams, and let us here at Re/Max help you buy your piece of paradise in Costa Rica.

Who knows?  You may find yourself starring in an episode of House Hunters International alongside Chris Spears!