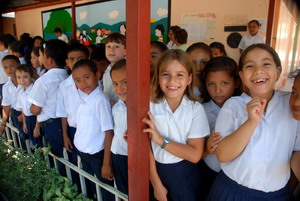 There's different options for the family moving in Costa Rica. The majority of expats will choose the private education over the public education, especially when their native language is English.

Schools in the Guanacaste province enjoy an exceptional reputation. There are schools to suit most ages, budgets and education goals. Students from the various academies have been accepted to esteemed North American universities and colleges such as McGill in Canada and MIT in the USA. Some of the more established private schools in Tamarindo and the surrounding area are:

Educarte - is certified and international. For young children from Pre-Kinder to Grade 8, a good option is Educarte (linked with St. Joseph's in San Jose).

LA PAZ Community School - At 3.5 years of age, La Paz Community School becomes another good option - it's exactly 50/50 for English/Spanish and is internationally certified. They offer from Grade 1 to Grade 12 and are located in the Mar Vista Gated Community in Playa Flamingo.

CRIA School (Costa Rica International Academy) is certified and international. They offer from Pre-Kinder to Grade 12. The main language spoken is English and they follow the program in the States. The second language learned is Spanish. All universities of North America and Europe accepts the students from CRIA. They are located in Playa Brasilito, just a few kilometers from the luxury gated community of Reserva Conchal.

The last 20 years have seen a significant boosts to educational standards. Since the 1970's, Costa Rica has invested more than 28% of the national budget on primary and secondary education. The Constitution mandates that public expenditure in state and higher education should not be less than 16% per annum of the gross domestic product. The Ministry of Public Education is in charge of awarding scholarships and assistance to those in need.