Visiting Costa Rican President Laura Chinchilla said Friday that her country is prepared to assist Japan's efforts to diversify its energy policy by developing renewable energies and cutting its dependence on nuclear power. 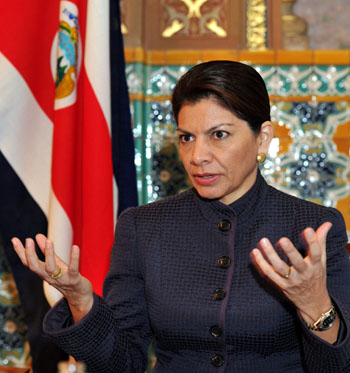 Chinchilla arrived in the country Tuesday, her first visit to Japan since becoming the first female president of Costa Rica, which is consistently ranked as one of the most environmentally friendly nations in the world.

"I think that you find a turning point here in Japan after the (March 11 earthquake and) tsunami and the tragedy that occurred with the (Fukushima No. 1) nuclear plant," Chinchilla said during an interview with The Japan Times.

"What is happening here has been very clear for me during my conversations with public officials and also (through) visiting the clean energy exhibition (at Chiba's Makuhari Messe center) . . . it is very clear that Japan already decided to move toward diversifying its energy sources, and I think that's the right thing to do," she said.

Renewable sources of energy, including hydroelectric and geothermal power, account for more than 90 percent of Costa Rica's power supply, and the Central American nation has ranked highly in environmental performance lists.

Chinchilla praised Japan's advanced technologies in the renewable energy sector, and stressed that the two nations should strengthen their collaboration in the field. Japan has previously provided technical assistance in geothermal power generation in Costa Rica.

"I foresee a very productive relationship in the area of renewable energy because we are a kind of experimental laboratory, we have the best conditions for producing any kind of clean energy — solar, wind, hydro, biomass — and Japan has the technology," she said.

But Chinchilla voiced skepticism about the COP17 climate change conference that wrapped up Friday in Durban, South Africa, and the level of commitment shown by major polluters to cut back on their emissions.

"It's very frustrating because you have nations like my country, which behaves according to the right standards, but since we are a very small economy we cannot make big changes when it comes to climate change," she said.

"On the contrary, we are one of the nations that suffer more of the impact of climate change," she said. Past environmental reports have indicated that highland forests in Costa Rica may be seriously affected by climate change in the future, causing a decline in plant and animal species as the area becomes warmer and drier.

Chinchilla is visiting Japan to strengthen bilateral political and economic bonds, and also to celebrate more than 75 years of diplomatic relations between the two countries.

On Thursday, she had lunch with Emperor Akihito and held a bilateral meeting with Prime Minister Yoshihiko Noda. Since arriving, she has also attended various business and investment forums, as well as the Renewable Energy 2011 Exhibition at the Makuhari Messe center. Chinchilla will return to Costa Rica on Saturday.

"We would like to strengthen investment and trade relations with Japan," Chinchilla said at a joint news conference with Noda after their summit in Tokyo on Thursday, calling on the government to enter into talks on a bilateral free-trade pact.

Noda said he is keen to bolster ties between the two nations, and thanked Costa Rica for choosing Japanese technological specifications for its terrestrial digital television broadcasting.