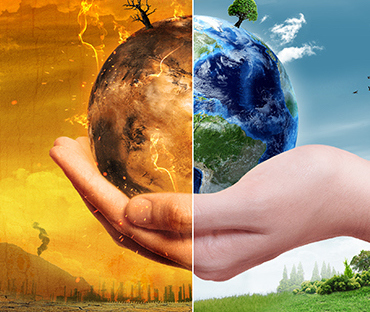 Human emissions of heat-trapping greenhouse gases have caused climate change. The widespread effects on the environment include the shrinking of glaciers, the shifting of plant and animal geographic ranges, and the premature blooming of trees. The sea level is rising at an accelerated pace, and heat waves are more intense. The general warming of the planet has fueled life-threatening weather throughout the world. Wildfires are more frequent, periods of drought are longer, and the intensity of tropical storms has increased. How has Costa Rica fared? What signs of climate change can be observed in this peaceful tropical country? And what steps have been taken there to halt or even reverse climate change?

According to Worldbank.org, the biggest weather threat to Costa Rica is tropical and subtropical cyclones. Interestingly, a true hurricane (defined as a tropical cyclone with winds over 74 mph) has never made direct landfall on Costa Rican territory. Because of its proximity to the equator, major storms have always passed to the north of Costa Rica’s borders. Nevertheless, rains and resulting floods have had an impact. For example, Hurricane Otto dumped as much as 12 inches of rain on northern Costa Rica in November 2016 when it made landfall in Nicaragua, Costa Rica’s northern neighbor. The resulting flash floods and landslides claimed ten lives and devastated two small communities. Property damage was estimated at $192 million. The rains from Hurricane Nate the following year forced hundreds of residents to evacuate. A total of 14 persons were killed by the torrents, fallen trees, and landslides. Total damages to homes, crops, and infrastructure were estimated at $562 million. These severe weather events point to climate change. However, it should be noted that the coastal section of Guanacaste province is largely protected from destructive weather. Hurricanes form in the Atlantic Ocean and travel from east to west. They lose strength as the cross land, so by the time their winds reach Guanacaste, they’ve been weakened considerably. The heaviest rainfall occurs in the mountains in the center of Costa Rica. Once again, Guanacaste is protected from the worst of the storms. And the rainstorms that form over the Pacific Ocean are not dangerous.

In addition to the loss of life and property, climate change takes a toll in many other areas. Costa Rica is famous for its biodiversity. It contains almost 6 percent of the world’s biodiversity in a land area that is only 0.03% of the earth’s surface. Climate change threatens many of those species. For example, the cloud forests of the central mountains of Costa Rica are sustained by rising moist air that constantly bathes the vegetation in precipitation. They are rich in flora and fauna and are essential to maintaining freshwater resources in Costa Rica. Presently, cloud forests are located at elevations above 1000 meters. However, if temperatures continue to rise, the cloud forests will recede and begin at higher elevations. What impact will that have on biodiversity? According to a study undertaken by the University of Massachusetts Amherst, “Various ecosystems will try to migrate to where they are comfortable, moving in an upslope direction in this case. As they migrate, plants and animals will disturb other species, and eventually run out of space as they reach the top of the mountains. The result may be a loss of many species that can’t survive the new conditions.”

Unless definite steps are taken to reduce greenhouse gases, greater climate changes are predicted. Climate Expert states: “The Intergovernmental Panel on Climate Change identified Costa Rica as one of the hotspots where weather conditions will change the country's current landscape in the next 50 years.” In the short term, changes in rainfall patterns and levels caused by the ongoing effects of El Niño are expected. The El Niño weather pattern produces extreme weather conditions including both floods and drought. In the long term, average temperatures will increase 3-6 degrees Celsius by 2070 according to the National Meteorological Institute.

What Is Costa Rica Doing to Reverse Climate Change?

Costa Rica has a long tradition of environmental stewardship. In 2006, President Oscar Arias announced a far-reaching climate change strategy and a commitment to becoming a carbon-neutral country. His stated goal was to transform Costa Rica into a leader in the battle against climate change. Actions include reducing emissions from energy production, transportation, and agriculture. Solid waste management and reforestation are other elements of the program. In April 2022, Costa Rica added the National Climate Change Adaptation Plan. The plan proposes to avoid losses and reduce damages caused by the adverse effects of climate change over the next five years. President Alvarado explained: “The faster the climate changes and if adaptation efforts are postponed, the more difficult and costlier it will be for us to recover from the physical, economic, social, and environmental losses caused by climate-related events. This is why we must act urgently.”

Are the Initiatives Working?

The Minister of Environment and Energy, Rolando Castro, stated, “We are extremely grateful to the 49 institutions who have assumed solid commitments.” Such community support is essential because successful adaptation depends not only on governments but also on the active participation of different parts of the private, public, and civil society sectors. Costa Rica was the first tropical country to stop and reverse deforestation. It produces about 99 percent of its electricity from renewable sources. Electric vehicles are promoted with tax credits, and electric buses have been implemented on some urban routes. The United Nations granted Costa Rica the Champions of the Earth award for its program and praised the initiatives as a model for the region.

What is our Remax office in Costa Rica doing to help?

We recently replaced our Air Conditioning for inverter units, to save on electricity consumption. We have tinted windows to help filter the sun so we use less power to bring the temperature down and we use LED lights all over the office. We also stopped printing publicity flyers and magazines a few years ago - we are now digital everywhere and print only when it is necessary. We only use Lithium Batteries so have less replacements. When possible, we use one car to drive to a property with our clients instead of multiple cars. Every little step is important and we are glad to participate to live in a better world, greener!