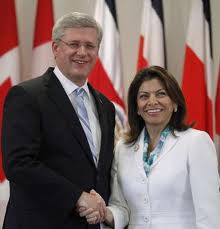 The agreement demonstrated almost immediate positive results and within three years trade between the Canada and Costa Rica went from 324 million to 440 million dollars.

“The Canada–Costa Rica Free Trade Agreement was designed to take into account the dissimilar sizes and levels of development of the two economies and to provide balanced market access for industrial and agricultural exports from both countries.” –International Economics

In the very near future, the CCRFTA will be revamped. In August of 2011, Costa Rican President Laura Chinchilla and Canadian Prime Minister Stephen Harper announced that the two countries would begin negotiating a “modernization” of the existing trade agreement.

Current Canadian Minister of International Trade Ed Fast said last Friday that the fourth round of talks has been concluded in regards to CCRFTA expansion and modernization. The existing agreement seems to be lacking in such areas as government procurement, financial services and investment. Canada believes that the FTA modernization will assist Canadian businesses.

Costa Rica would benefit by experiencing a sixty seven percent elimination of tariffs on Canadian goods. The remaining tariffs, depending on the product, would be eliminated over a period of either seven or fourteen years. Also, because Canada receives an eighty seven percent cut on duties (Canada is a much larger country), Costa Rica enjoys earning substantially more money in the exportation of Costa Rican products. In 2010 Canada purchased $436 million worth of Costa Rican export, which is millions of dollars higher than a decade ago.

The new trade agreement is expected to solidify trading relations between Costa Rica and Canada and increase the monetary amount of import/export between the two countries. Both Costa Rica and Canada can expect to see expanded opportunities for their business communities in markets that were left out of the original agreement.